Stellar is an open network for creating, sending and trading all forms of money. Users can access a digital representation of a basket of popular currencies and then utilise Stellar’s decentralised blockchain to move that value anywhere in the world quickly and at a low cost solving cross-border payment issues and challenging costly remittance providers.

The native currency of the Stellar network is called the Lumen and is used to pay for transaction fees. The system doesn’t, however, prefer Lumen above any other currencies. Lumen simply acts as a bridging currency facilitating the transfer and exchange of other currencies.

Stellar was founded in 2014 by a lawyer called Joyce Kim and Jed McCaleb who was behind the infamous Bitcoin exchange MtGox and co-founded the Ripple. The Stellar Network went live in July 2014 following the formation of the Stellar Development Foundation (SDF).

The SDF now has offices in San Francisco and New York maintaining Stellar’s codebase, supporting the technical and business communities around Stellar, and engaging with regulators and institutions.

To maintain an accurate record of account balances and the operations each user is capable of Stellar doesn’t use either the energy-intensive Proof of Work consensus of Bitcoin or the Proof of Stake approach soon to be adopted by Ethereum. Stellar uses its own bespoke system called Stellar Consensus Protocol (SCP) developed by Stanford Professor David Mazières.

SCP doesn’t require all nodes to reach consensus but instead relies on groups of nodes called Quorum Slices to coordinate and compare their understanding of the accurate state of transactions.

As these Qurum Slices overlap, SCP goes through an iterative process of reaching Supermajority - overall agreement of the accurate state of balances. Though the SCP sounds complex all balances and operations are transmitted to the network in just five seconds.

The Stellar blockchain is an open system that anyone can join. Users can access existing digital currencies while organisations can act as Anchors to facilitate the exchange of additional currencies through external banking and payment systems.

XLM acts as the bridging currency between other asset pairs being the only asset within the network that doesn’t require deposits to be held with an Anchor.

Stellar compares its user experience to existing digital payment methods like Paypal or Venmo and given it supports microtransactions for low, flat fees it is very popular for overseas workers sending money home.

As Stellar creates synthetic versions of national currencies like the US Dollar it makes them much easier for businesses to move across borders.

The flexibility of Stellar Core can accommodate permissioned or centralised ledgers that want control over how transactions are validated and by who, as well as enforcing compliance criteria on users (such as KYC). These are essential components of CBDCs which is why Stellar is being trialled by Ukraine’s central bank.

Buying XLM is easy as it is widely available on centralised exchanges such as Bithumb (popular in Korea), Coinbase and Binance. Read NGRAVE’s guide to how exchanges work so you can understand the process, costs and risks.

Wherever you choose to buy XLM the safest place to store it is on an NGRAVE ZERO cold wallet protected from online threats. 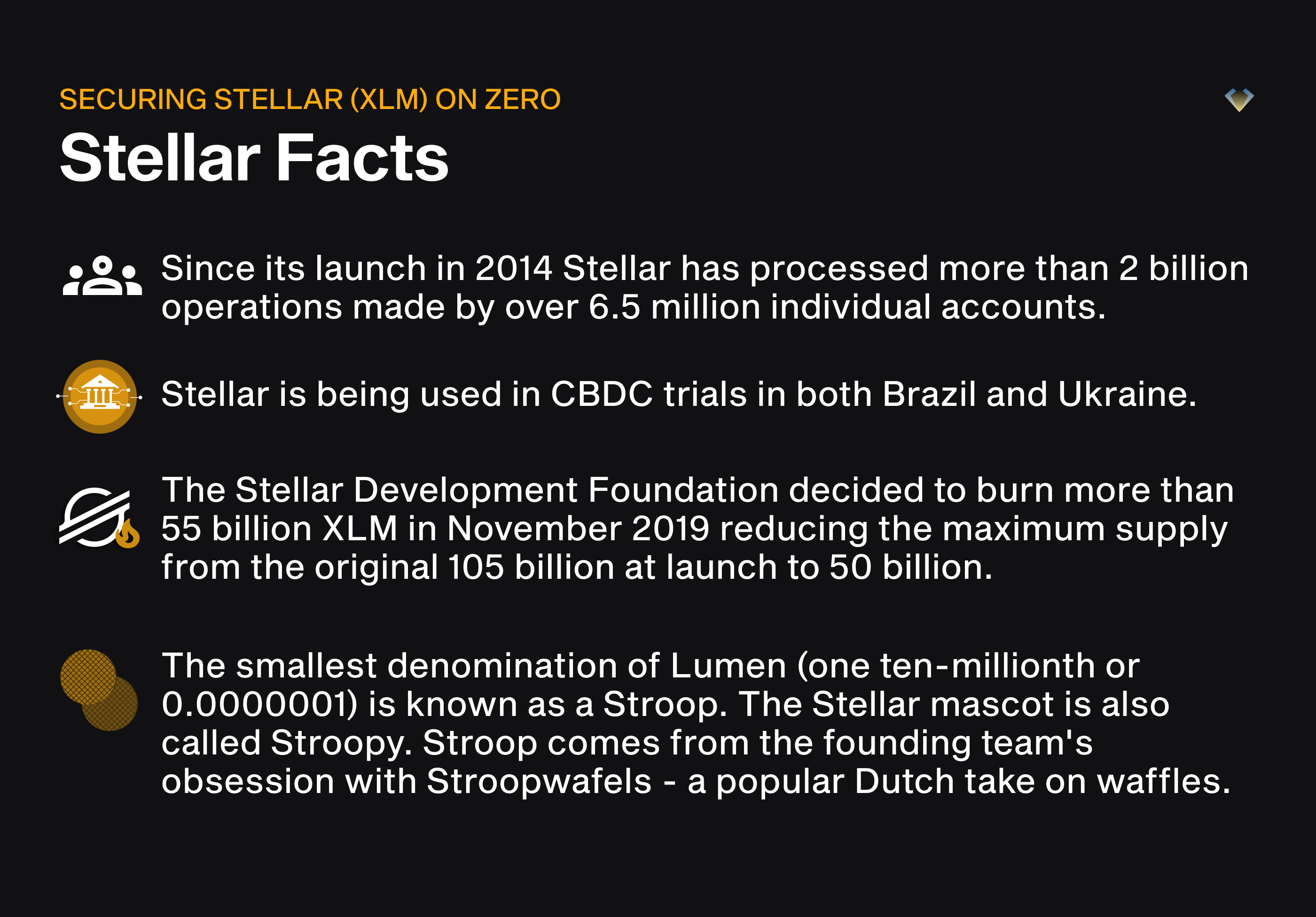 Many in the crypto community feel that CBDCs - which Stellar supports - could be used as a tool of financial surveillance and oppression. Learn more about CBDCs in our dedicated post.

Stellar uses a Federated Byzantine Agreement to reach consensus among nodes - nodes trust certain other nodes. Some argue that this isn’t really decentralised. There are currently less than 100 nodes in the Stellar network.