7 Profitable Ways to Earn Crypto With DeFi in 2022 7 Profitable Ways to Earn Crypto With DeFi in 2022

0. Low Bank Yields and the Lure of DeFi

Token staking has a long history within the blockchain realm. Today, it is synonymous with staking pools and decentralized finance (DeFi). A split second brings back memories of how depositing your money at the bank earns you interest, as the bank can deploy those funds to earn returns elsewhere, overall making a profit. Present day, Zero Interest Rate Policies (also known as ZIRP) and Stimulus Spending (QE or Quantitative Easing) kind of make that avenue so much less enticing for you and me.

The good news is that protocols can also incentivize users to lock up their tokens for rewards. Users receive additional tokens, and the protocols at their turn make use of that locked liquidity.

Not so long ago, before staking, the greatest obstacle which blocked the progress of decentralized finance (DeFi) was a lack of liquidity. Decentralized protocols did not enjoy the same deep pockets as their centralized peers, placing them at a significant competitive disadvantage.

It wasn’t until June of 2020 that things began to change, and change at pace. Lending platform Compound started to incentivize both lenders and borrowers with their COMP governance token. For engaging with the platform users received COMP tokens, and as the price of COMP grew, so did the benefits. The token incentivization scheme propelled Compound to new heights, and protocols around the cryptosphere started to pay it the sincerest form of flattery through their imitation. Many thrived.

Elsewhere in the DeFi sector, the incentivization schemes used by decentralized exchanges such as Uniswap were evolving.

To make decentralized token swaps possible, exchanges encourage third party liquidity providers to lock asset pairs into liquidity pools. Liquidity providers then receive a proportional share of the trading fees generated by that pool. Minus further incentivization, these locked assets should offer a reasonably steady and reliable return. The “farming” aspect typically comes to life when the user starts rotating between pools ever in search of the highest yield. 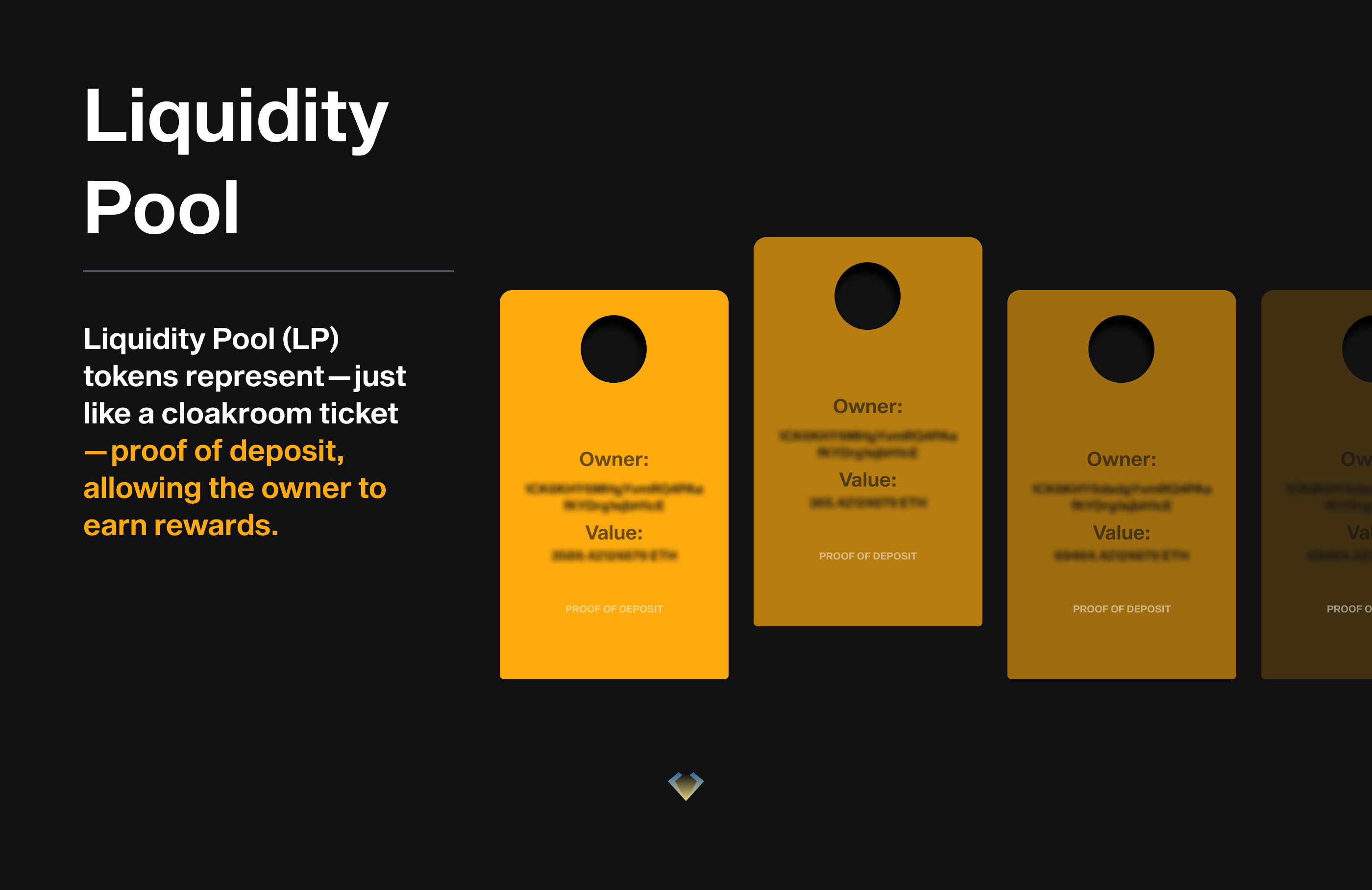 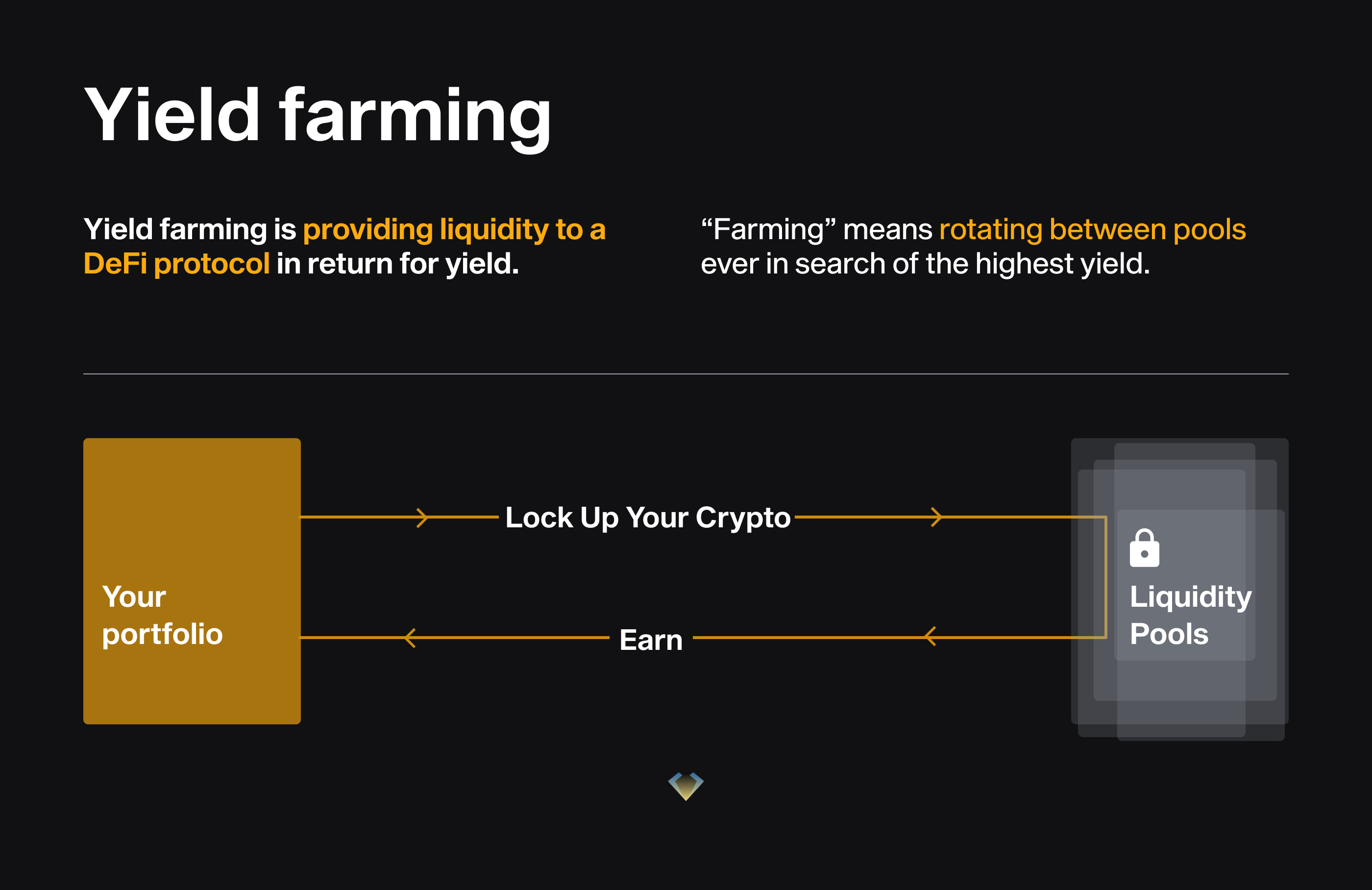 Like the cloakroom ticket, the LP tokens themselves initially held little to no intrinsic value. They were only really useful at the point of deposit and at the point of collection. What if, however, LP tokens could themselves be plugged back into decentralized finance and be locked up at their turn, earning newly minted tokens from a protocol in a similar fashion to the way Compound had distributed COMP to its customers? 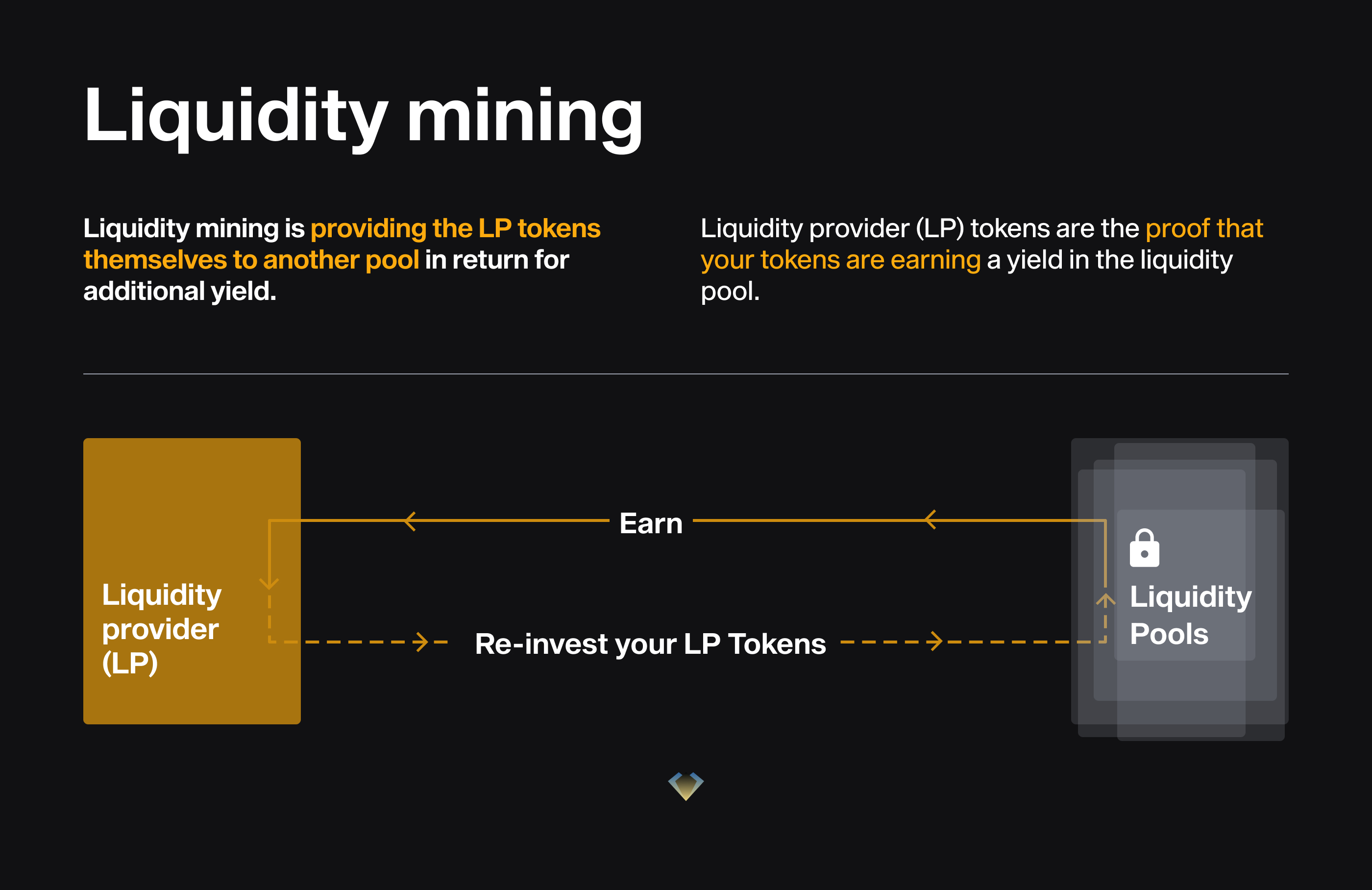 For liquidity providers that transforms the narrative of LP tokens from, “You can enjoy steady, semi-reliable returns on your assets,” to, “strap yourself in for this rocket launch!”. In crypto, the second narrative has always proved more popular. So began the DeFi boom of 2020.

In crypto, no good (or bad) idea goes un-copied, and all ideas morph, mutate and evolve. Swift development cycles and continual iterative change are the norm. The idea of staking for some kind of user benefit is one such example. 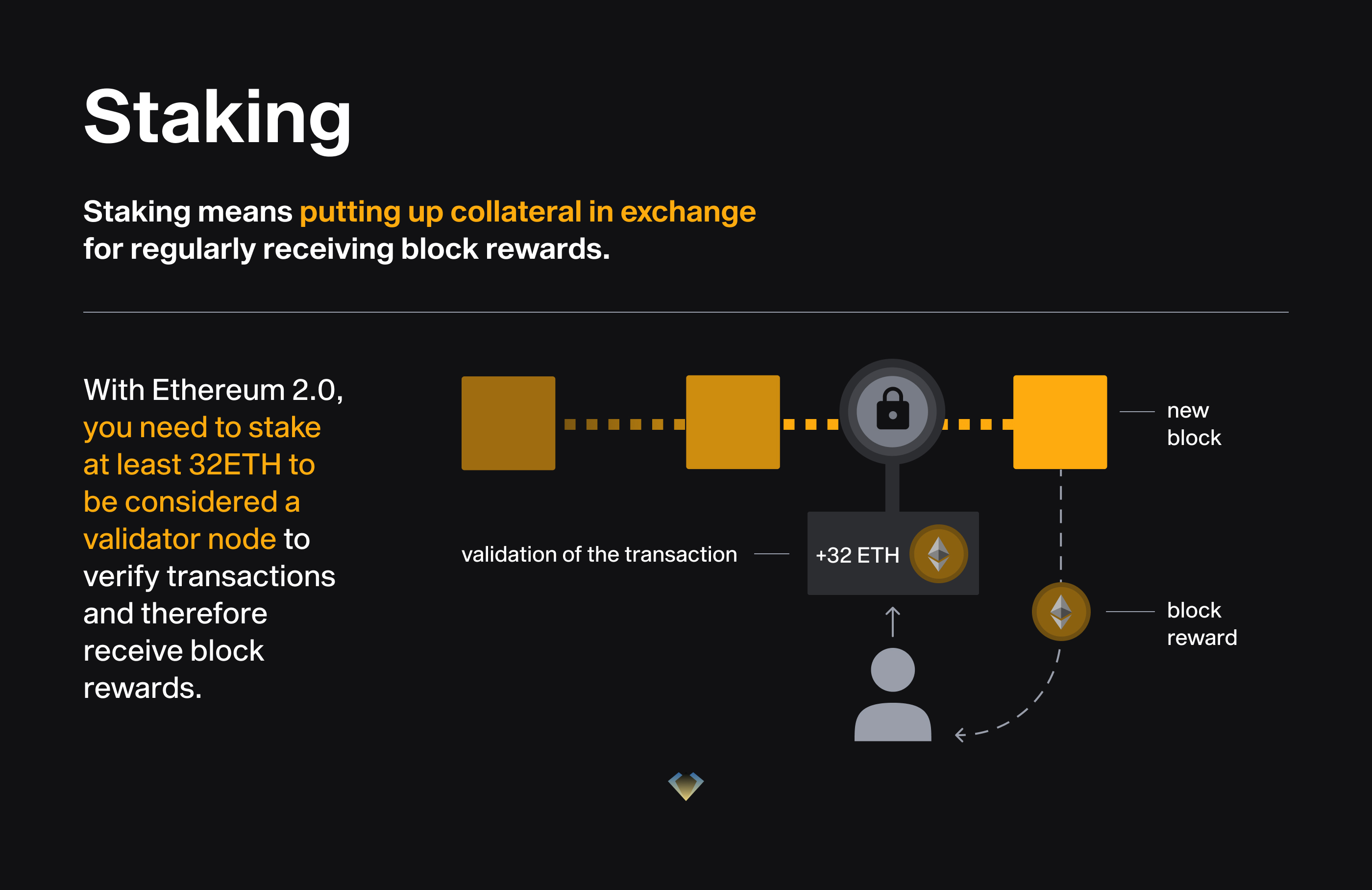 You could argue the confluence of staking and cryptocurrency dates back as far as Peercoin. In 2012 Peercoin helped to pioneer Proof of Stake (PoS) as a means of reaching network consensus, an alternative to Proof of Work (PoW) networks such as Bitcoin. In Proof of Stake consensus, transactions are approved by validators who are rewarded financially for their efforts. Part of the conditions for qualifying as a validator is through the holding and staking of tokens. Proof of Stake cryptocurrencies include Cardano, Tron and EOS. One day that list could even include Ethereum (and which is what the Ethereum 2.0 roadmap is aiming to achieve). 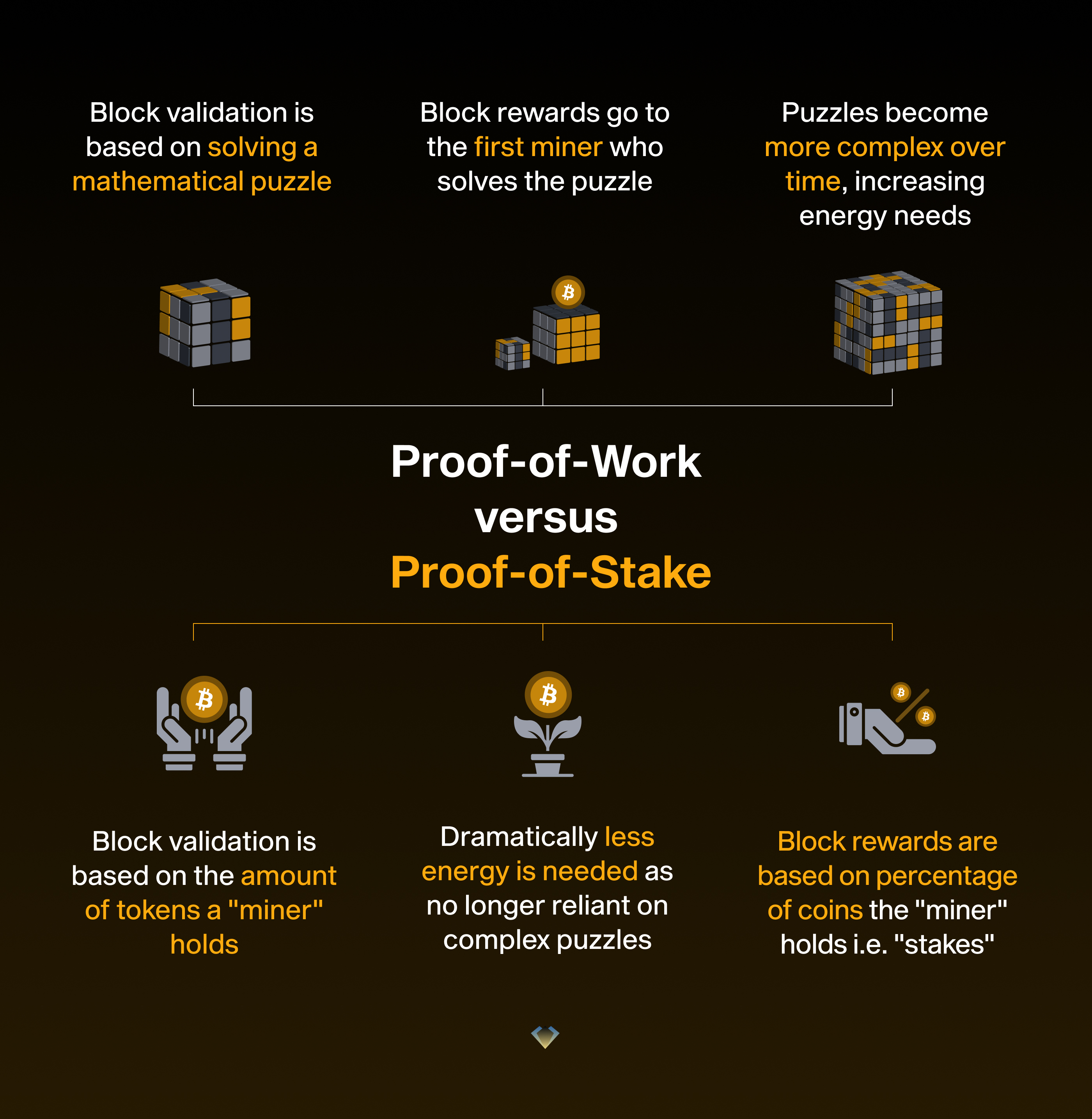 During the ICO boom in 2017, token staking was touted as one way of solving the token velocity problem which many projects faced. The token velocity problem was identified following Chris Burniske’s application of monetary theory to Bitcoin in a 2016 report for Coinbase. The simplified version of the theory is as follows: “the less time users hold on to a token, the higher its velocity, and the less likely it is to accrue any value”.

One way to decrease the velocity of a token is to encourage users to stake tokens for additional privileges and benefits not made freely available to other users. These rewards can be anything from additional functionality and services, to reductions on transaction fees. The locking of tokens reduces the token velocity, creates a price floor, and should place upward price pressure on the token itself.

It was this application of economic theory to token ecosystems which birthed the term ‘tokenomics’.

4. Alternate Staking: Your Return in Another Token

While locking token pairs into an exchange for LP tokens and then yield farming those LP tokens may be simple enough for some users, crypto is a mixed ability group. Not all users may feel completely up to the task of following the complexities of this system.

This is where staking pools come in. Staking pools allow users to lock up a single token receiving rewards back either in that same token or in a third party token.

Users receive rewards for locking their tokens, the protocols receive additional liquidity from users who might not feel confident enough to otherwise engage in DeFi, and the tokens in the pools have (theoretically) reduced velocity. It’s a win-win-win situation.

5. Let Your NFTs Earn For You

Even as staking becomes particularly popular for individual users, DeFi is unlocking ever more use cases for staking, and even NFTs are getting in on the act. Non-Fungible Tokens are that next level where DeFi is making its mark. NFTs — think of a digital, one-of-a-kind piece of art (e.g. the Rarible platform), virtual land (Decentraland), or other — could be used as collateral. Also, NFTs could be bundled into a group of which you can can own partitions (referred to as “wrapped NFTs”). Finally, what tokenization’s idea was for e.g. fractionalizing real estate ownership, is also very much possible for NFTs, here again splitting its ownership over several stakeholders.

6. Inter-chain Mining: The Next ICO Wave?

Moreover, token staking is now touted as a potential crowdfunding method thanks to the Initial Validator Offering (IVO). In an IVO, validators lock up their tokens using an existing Proof of Stake network and “interchain-mine” a new token. This can allow projects to crowdfund without asking anyone to spend their existing crypto assets. The idea has yet to fully take off, but illustrates another potential use case.

An emerging trend which does seem to be gaining traction is ‘liquid staking’. In liquid staking token holders can stake their tokens to become validators in Proof of Stake networks, and then receive tokenized versions of the staked funds. This is not dissimilar to a derivative, or receiving an LP token for providing liquidity on an exchange. Once the new LP/derivative token is received this can then be plugged into DeFi networks for staking pool opportunities, essentially enabling users to benefit from (and stake) their tokens twice over.

If this sounds a little like magic money to you, you may have a point, but remember, that’s what your granddaddy said about Bitcoin. Staking may already have a significant history in blockchain, but thanks to the sector’s endless capacity for innovation, we’ve only just scratched the surface. Crypto
What is a CBDC & should we be scared?
Though CBDCs promise some clear benefits - simplifying the financial interaction with the government - they threaten a new form of information tyranny, described as surveillance money.