Blockchain is a database technology that records transactions. It tracks assets in a fully decentralized way, often referred to as peer-2-peer (P2P), meaning that no intermediary is required for adding a new “block” of information to the “chain”.

How can we say that simpler? Well, blockchain is a network that keeps receipts of transactions on multiple computers (nodes) simultaneously. The specific term for this is “Distributed Ledger Technology” (DLT), which we’ll explain later. In essence, because the data is kept on multiple nodes at the same time, various users can access the database and propose or validate changes. Because of this consensus, the information is immutable as there are copies of each transaction receipt on many computers (nodes).

Blockchains can record information about cryptocurrency transactions, DeFi applications, smart contract executions, and NFT ownership. Virtually everything of value can be traded and tracked on a blockchain network, leading to lower costs and reduced risks due to the absence of an intermediary.

Warning: blockchain is not the same as bitcoin. Bitcoin is a cryptocurrency built on top of a blockchain. It is a medium of exchange like the US dollar, that uses encryption techniques to control the creation of monetary units and verify the transfer of funds. Blockchain is the technology that stores specific information (e.g. transactions) securely and transparently.

The 6 key attributes of a blockchain

Before we take a look at how blockchains work and consider various use cases, it is vital to have a basic understanding of the following concepts:

Knowledge for all levels. Join our newsletter to receive the latest articles.

How does blockchain work?

The concept of blockchain might sound somewhat abstract. But never fear. We will go through it step by step to present a clear visualization of how it works. To start, let’s have a look at what a hash is:

SHA stands for Secure Hash Algorithm. The SHA256 hash may look like a set of random numbers but is actually a fingerprint/signature of a digital dataset. It identifies a block and all of its contents and is always unique. After the block is created, the hash is determined based on the data that the block contains. A different input will always lead to a different hash but will always be 64 characters (in the case of SHA256).

It is almost impossible to figure out what the hash function stands for. To give an example:

Apart from containing its hash, a block also has the hash of the previous block, its sequence number, and a nonce. The hash needs to start with a certain number of zeros to be approved (currently, bitcoin requires 19 zeros).

Let’s see how we can create a blockchain.

We just saw how blocks are created. Well, a blockchain is a chain of these.

Except for the first one, all blocks contain the hash of their predecessor. Let’s have a look at an example:

(These tables are purely hypothetical)

Now imagine that the BTC price increases and X is not happy that he sold $50 of his BTC to Y. He decides to change the $50 to $25 to have more BTC left. Let’s have a look:

Because X broke the block, X should re-mine the second block to get the required zeros. By going through the mining process again, X will pick another nonce.

X should repeat this for every block until the chain is correctly hashed again.

something, the harder it will be to re-do all the work.

Due to the distributed property of blockchain, we can see if a block was re-mined or not. Let's dive deeper into this.

Every person (node) on the blockchain would have an exact copy of the first chain (the original one without any changes). When X changes something about his chain, the peers will see a difference. How? If the last hash in the chain of the peers is 0000ae8bbc, then the hash in the chain of X would be different.

The nodes will only pick the most trusted chain of the two. In the example above, it would be the original chain. It works in a democratic way: Y, the restaurant, and the grocery store agree that the first one is the original and correct one, while X is the only one who claims otherwise.

In the previous example, we created some transactions with X and Y. Now, nothing is preventing Z from adding a transaction that spends all of the remaining money/BTC X has ($50). We need another cryptographic primitive to prevent this kind of spending, called public and private key pairs.

Above, X sold his BTC to Y. X needed his private key, which only he should know, to verify the transaction. The moment X signs his transaction, he will receive a signature message.

After receiving this, X transmits a verification message. In this step, the public key gets checked with the signature message to see whether or not the private key behind the public key signed this message. The moment somebody tries to change something about the transaction, the chain will break. Also, the signature would be incorrect, which would make re-mining it useless.

In the example above, we used X and Y. In real blockchain use-cases, the public keys are the only identification of people.

The transactions are put into groups/blocks until it reaches maximum storage capacity. Then, they are chained onto the previously filled block. This system creates an irreversible timeline of data as each block gets an exact timestamp when it is added to the chain. 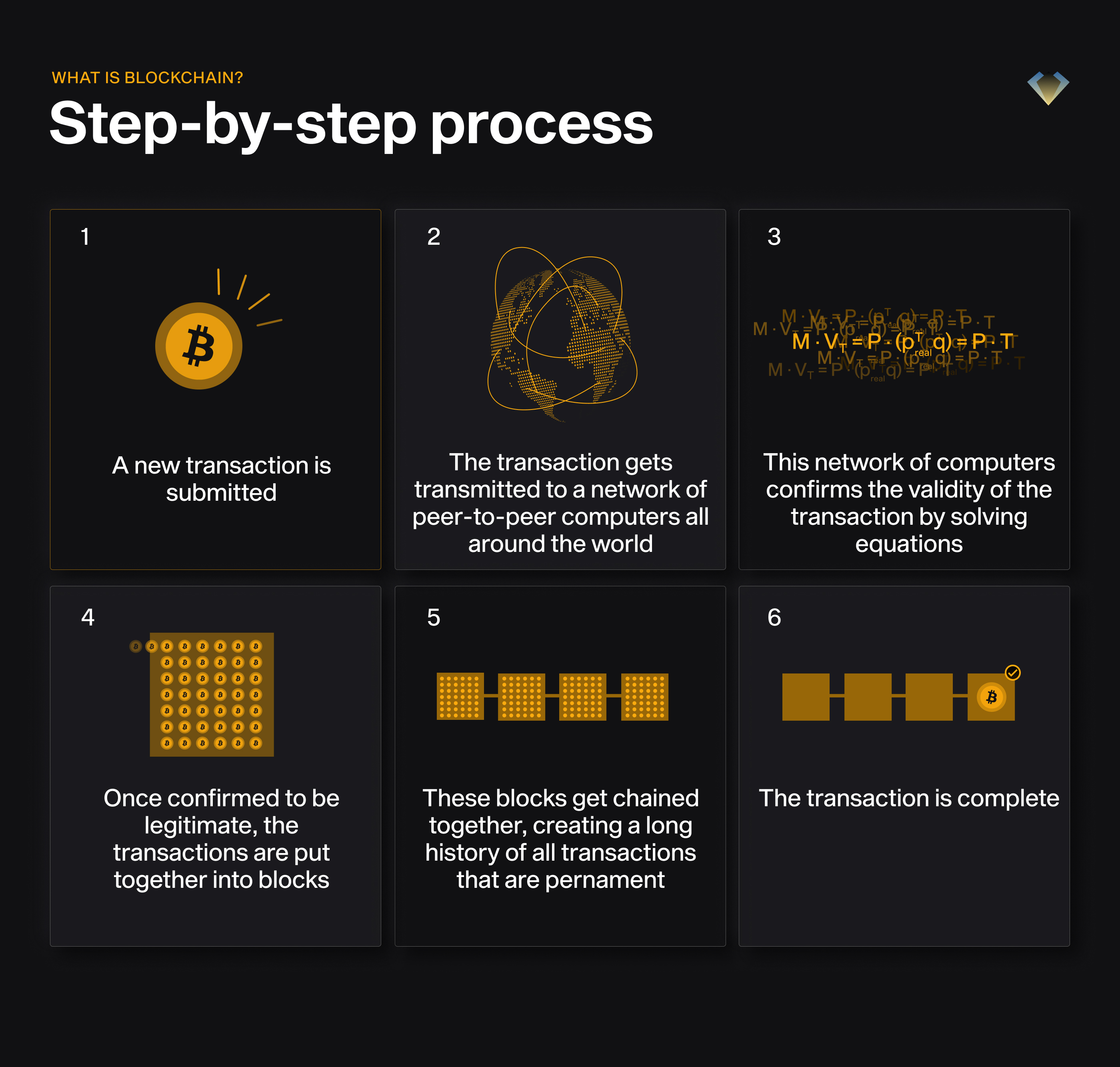 What are the different types of blockchains?

Different types of blockchains have and will emerge throughout the years. First, we will look at the most known blockchain type, public blockchains, and compare it to the others: 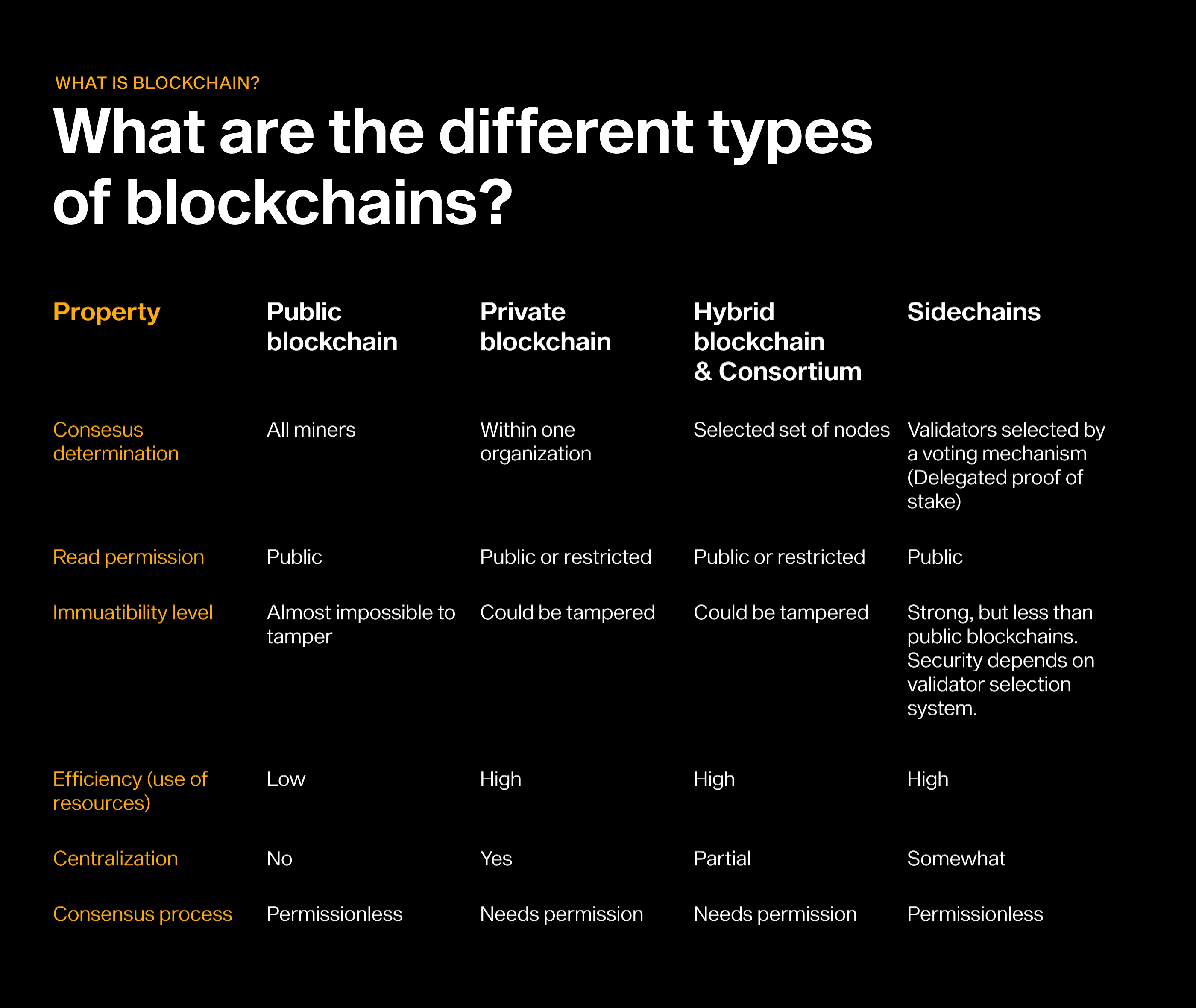 The 4 key benefits of blockchain

Blockchain technology can serve a set of purposes for organizations and individuals. It becomes a ‘trustless’ network, in the sense that it is so reliable that trust is not a concern. 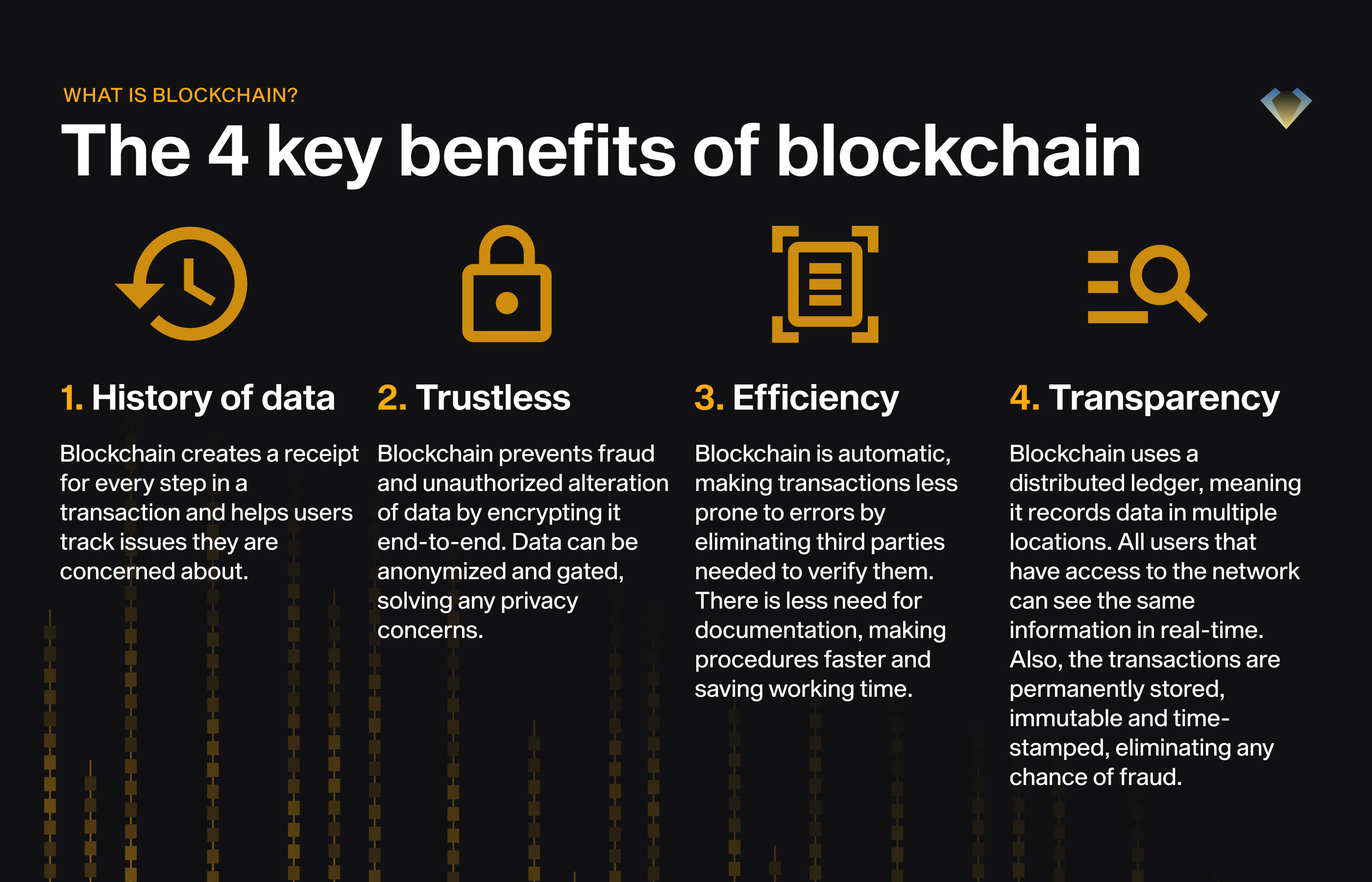 The 5 main challenges that blockchains face 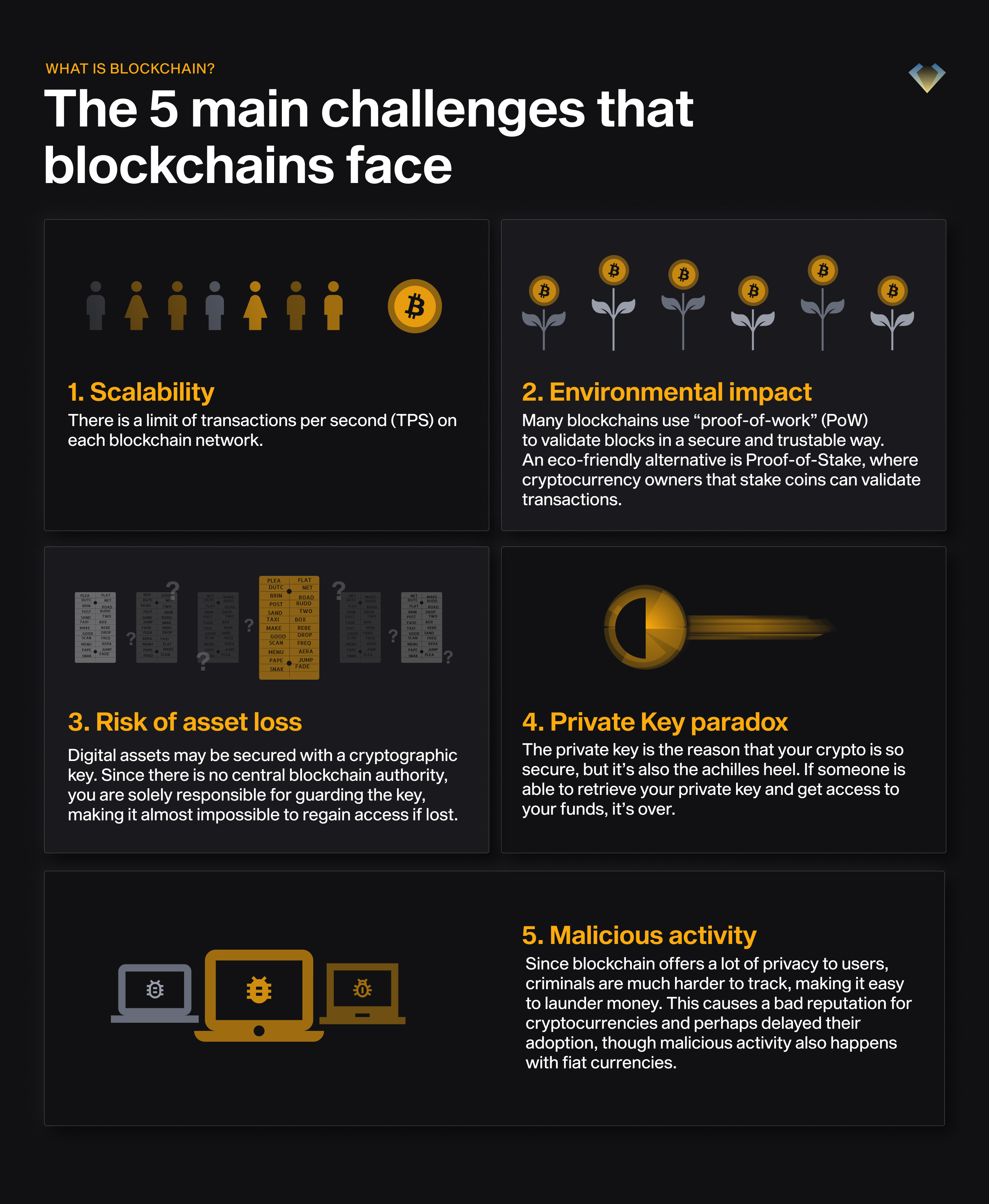 What are great uses for blockchain technology?

There are countless opportunities to benefit from blockchain. Here we list some areas that have made great advancements.

Satoshi Nakamoto’s historic bitcoin whitepaper described the use of a blockchain network to solve the problem of double-spending. Nakomoto owes a great part of his work to three key milestones that lay the foundation for the blockchains that we know today. 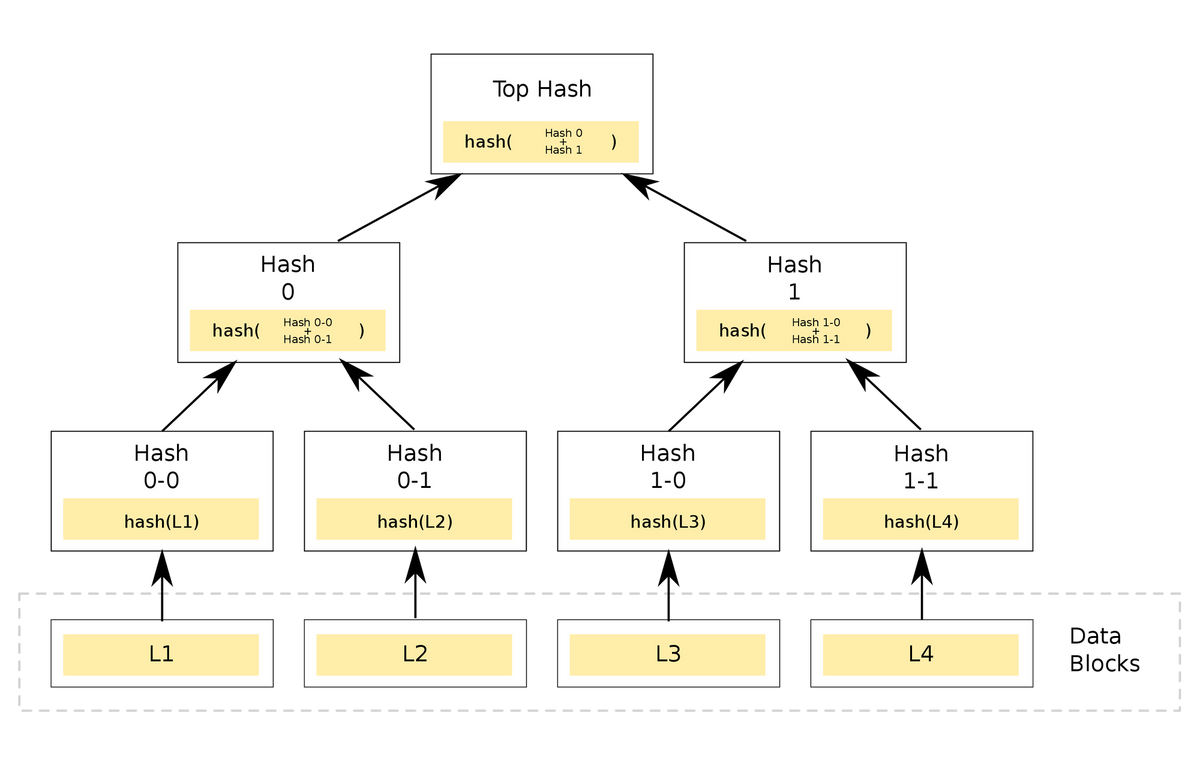 Meanwhile, David Chaum wrote in his 1982 Ph. D. dissertation about a vault system for establishing, maintaining, and trusting computer systems by mutually suspicious groups (a number of people/organizations who do not trust one another). Chaum is also credited with inventing digital cash.

In 1991, Stuart Haber and W. Scott Stornetta published an article about timestamping digital documents. Their research goal was to maintain complete privacy of the document itself, without requiring record-keeping by a timestamping service. They included their design in the Merkle trees in 1992 with an updated design that enabled multiple document certificates to live on a single block. Cited as second in the bitcoin whitepaper, Jean-Jacques Quisquater (NGRAVE advisor), Henri Massias, and Xavier Serret-Avila are also known for their research and on the concept of timestamping and were great influences to the development of the blockchains we know today.

For blockchain enthusiasts and dreamers, IBM created a list of five predictions:

Many claim that blockchain is following in the footsteps of the internet and will be adopted en masse just like that disruptive technology. It all depends on government policies and companies realizing they can gain huge benefits from blockchain implementation. The more it gets experimented with, especially by entities that can input considerable resources, the more valuable solutions will arise and the faster it will appeal to everyone. Blockchain
What is a smart contract?
A smart contract is a code that automatically executes predetermined actions when the required conditions are met. It brings certainty to the contract's participants while saving time and eliminating the need for third parties.